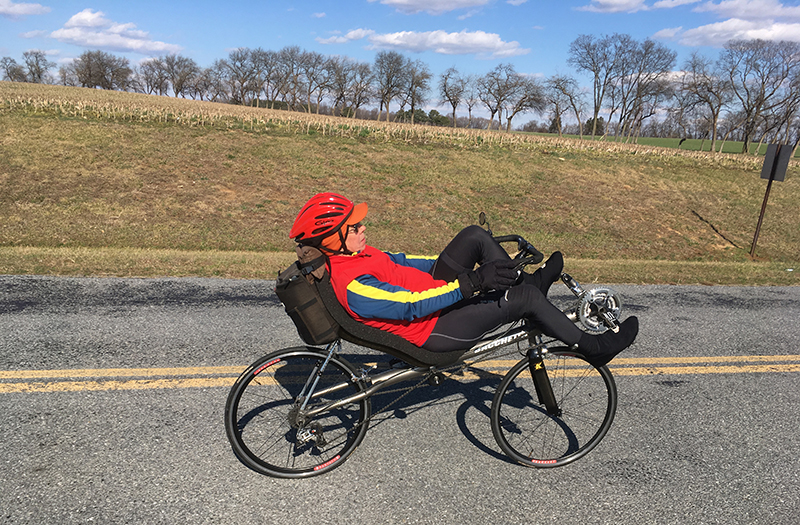 Wide, empty roads that lead through expansive landscapes of farm and forest, roads that lead to enticing waterfront destinations just itching for exploration by bicycle – that’s the allure of the Upper Eastern Shore along the Chesapeake Country National Scenic Byway.

As one local seasoned cyclist describes it, the Kent County section of the Byway is graced with very little traffic and smooth, open roads. The main roads – MD 213 and MD 20 – are well maintained with wide shoulders. And unlike other routes on the billiard-table expanse of the Eastern Shore, there’s actually some topography. The long, low hills add a little challenge as well as scenic vistas.

The whole route is steeped in history. Native Americans had been living there for thousands of years when Capt. John Smith “discovered” them in 1608. The British invaded during the Revolution and liked it so much, they came back to attack again in the War of 1812. You can learn the fascinating details at the many interpretive panels you’ll find along the way.

If you start your ride in Georgetown, just a mile down the road, you’ll glide through Galena, where Firehouse Antiques offers a co-op shopping experience for the antique hunter on Main Street, and where Twinny’s Place serves a dynamite bowl of cream of crab soup.

Another three miles down Rt. 213, you’ll see the sign for the Crow Vineyard and Winery. They have a tasting room where you can sample their award-winning Rosé and Vidal Blanc produced on-site from grapes grown on the farm, along with grass-fed Angus beef. Their 1847-era farmhouse has several B&B rooms, or your group of four can stay in the two-bedroom cottage.

A short spur to the north will take you to Turner’s Creek Park, the Kent Museum and the Sassafras River Natural Resource Management Area. The Visitor Center is in a 1796 home called Knock's Folly and is open on Saturdays (April through September) from 10 a.m. to 4 p.m. Exhibits highlight the history of farming in the area as well as the local Tockwogh tribe that Captain John Smith discovered on his exploration of the Sassafras River.

Between Kennedyville and Chestertown, you’ll ride by eight miles of farmland along Rt. 213, also known as “Augustine Herman Highway.” Born 1621 in Prague, then in the Kingdom of Bohemia, Herman was one of the earliest settlers in the area and one of the largest landowners in North America. A surveyor by training, Herman drew an astonishingly accurate map of Virginia and Maryland in 1670.

Between its founding in 1706 and the Revolutionary War, Chestertown became one of Maryland's leading ports, second only to Annapolis. This trade made local merchants wealthy, and many of their brick mansions and townhouses still grace the waterfront. Like Annapolis, the whole of downtown Chestertown is a registered Historic District, boasting more 18th-century homes than anywhere – except, of course, Annapolis.

You can get a sense of this unique place at the Bordley History Center at 301 High Street in Chestertown, the headquarters for the Historical Society of Kent County. The center hosts many events year-round, like their History Happy Hours that are part of the town-wide First Friday celebrations.

From the Bordley Center, you can take a self-guided walking tour that will lead you by many of the historic homes and churches, the Courthouse and the Custom House. The one you see today is the second Custom House on this site – which dates back to 1746. This is where, in 1774, a band of citizens inspired by the Boston Tea Party held their own protest and tossed a shipload of tea into the Chester River. The tea party gets reenacted in a festival every year at the end of May, with the Schooner Sultana as the centerpiece.

Launched in 2001, the Sultana is a replica of the 1768 schooner that served in the British Royal Navy enforcing the hated Townsend Acts or “Tea Taxes.” You’ll generally find the Sultana in her berth at the dock at the foot of High Street, that is when she’s not sailing with a crew of school kids or sea-loving visitors exploring the Chesapeake Bay’s rich natural and cultural history. Sultana also offers frequent public sails and themed paddle trips on the river.

The Sultana Education Foundation has opened an Education Center in Chestertown. The 9,000 square-foot building, certified to LEED Platinum environmental standards, features a science-focused wet lab, a geography classroom with the region’s largest GIS (Geographic Information Systems) projector, an extensive project shop for the maintenance of the Foundation’s schooner Sultana other hands-on projects, a 100-seat lecture hall and office space for the Foundation’s 15-person staff.

On your way to the waterfront and back, you’ll pass a number of fun shops and galleries featuring the wealth of artists working in a wide range of media to interpret in their own unique style, this beautiful region they call home.

If you’ve timed your tour correctly, and of course, if you’ve made reservations in advance, you’ll arrive at the White Swan Tavern between 3 and 5 p.m., when the staff of this impeccably restored 1733 bed and breakfast inn serves tea. George Washington sipped his tea here in this same parlor when he visited the town to help launch Washington College, the first college chartered in the nation after the Revolution.

Once refreshed and back on the road, your next stop is Rock Hall, the waterman’s town known as the “Pearl of the Chesapeake.” For a small town, Rock Hall actually covers quite a lot of territory, so don’t just stop at the “downtown” intersection of Rock Hall Road and Main Street. Continue on down Rock Hall Avenue to the end for a view of the Chesapeake Bay, and then back around to Rock Hall Harbor, where workboats, fishing charter boats and recreational sail and powerboats mix with aplomb. The Waterman’s Crab House serves hot crabs, cold oysters and offers beautiful sunset views.

Back “downtown,” you’ll find the Rock Hall Museum in the Municipal Building on South Main, with its replica of a decoy carving shop, and the Waterman’s Museum, with its fishing shanty and exhibits highlighting the history and heritage of the men and women who harvest the Chesapeake’s bounty.

Rock Hall has plenty of charming bed and breakfast inns, and one of the most delightfully cozy concert halls you’ll find anywhere. The Mainstay on Main Street is a storefront theater with an intimate atmosphere that hosts an eclectic mix of live jazz, folk and American roots music.

From Rock Hall, it’s about eight miles further south to the Eastern Neck National Wildlife Refuge, a birder’s paradise on a remote island at the mouth of the Chester River. Designated an Important Bird Area by the Audubon Society, the island’s 2,285 acres of brackish marshes, natural ponds, upland forests and grasslands provide habitat for more than 240 bird species, including wintering tundra swans and resident American bald eagles. You can see all this wonderful wildlife as well as expansive views of the Chester River and Chesapeake Bay along seven different hiking trails.

While it would be easy for an experienced cyclist to race the length of Kent County and back in one day, it would be hard not to stop and dawdle at every historic site, explore every antique shop and art gallery, sip and sup at every pub and diner, and watch every bird and boat float by. So pick a spot where you can hunker down for a night or two, take a room at the old farmhouse at the vineyard or the tavern in the town, and use that as a base for leisurely explorations by bike so you won’t have to miss a single sight along Kent County’s leg of the Chesapeake Country National Scenic Byway.

The Baltimore Bicycle Club has developed a bunch of other fun runs around Kent County, ranging in length and level of challenge. You can learn more about them by clicking here.