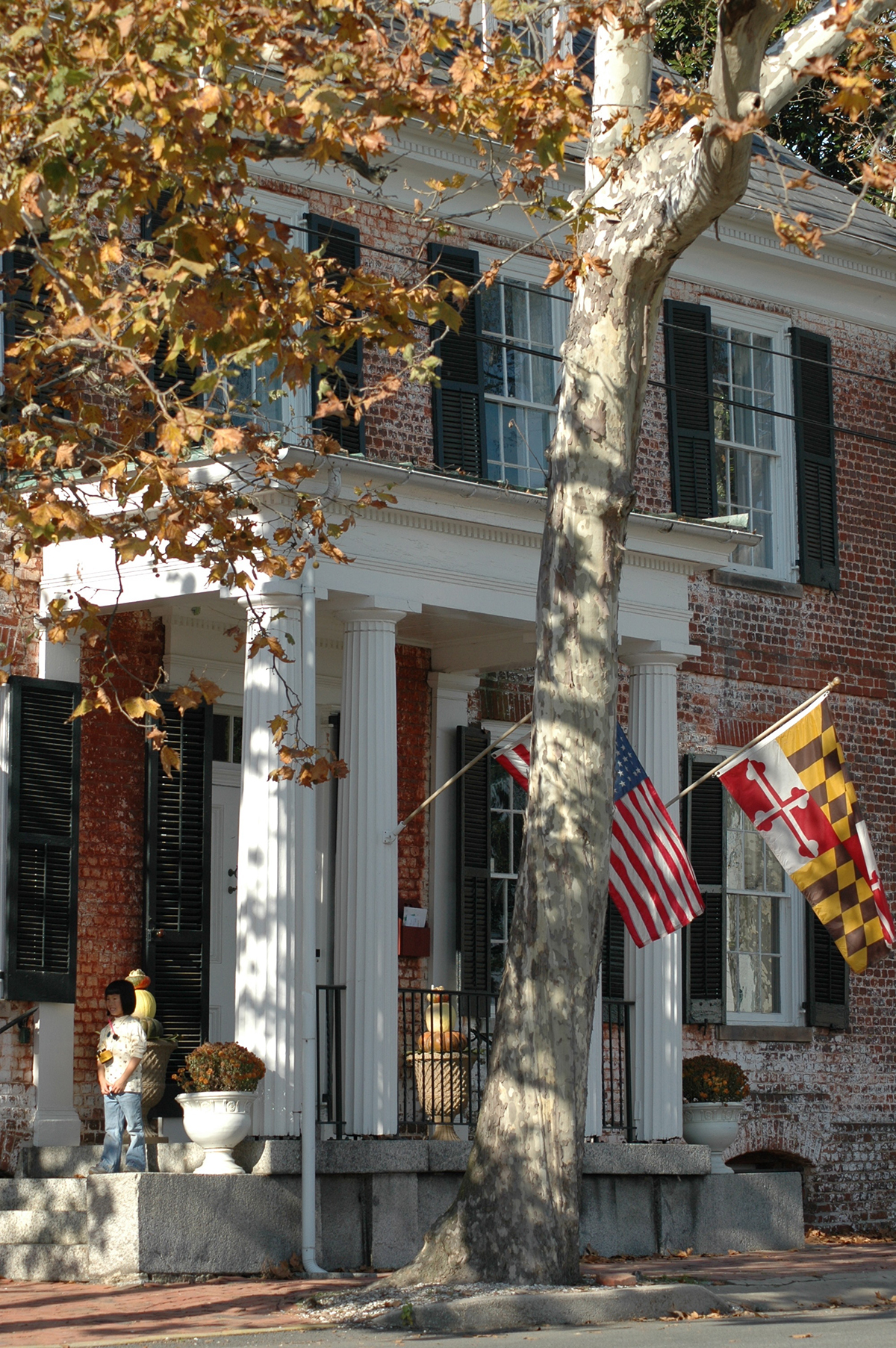 George Washington was a frequent visitor to Kent County, Maryland. Chestertown was a regular stop on his travels between Mount Vernon, Virginia, and Philadelphia. He became such an anchor in the community that he helped found College at Chester in 1782 and allowed the college to use his name. Washington served on the Board of Visitors and Governors for five years until he became president of the United States. Washington College is now one of the 10 oldest liberal arts colleges in America.

In 1773, Washington wrote in his diary about his sail from Annapolis to Rock Hall and then on to Chestertown. Upon arrival, he stayed at Mr. Ringgold’s home. This was the Hynson-Ringgold House on Water Street, where his hosts were Thomas Ringgold IV and Mary Galloway Ringgold. This imposing brick home, built in 1767, still stands on the corner of Water and Cannon streets and ironically serves as the official residence of Washington College presidents.

While you probably won’t get an invitation to spend the night there, you still have plenty of other options for colonial-era accommodations in and around Chestertown. Thanks to the citizens who saw the value of preserving the wealth of houses and other buildings from the 18th and 19th centuries, a good portion of downtown Chestertown is an official Historic District, listed on the National Register of Historic Places, and designated a National Historic Landmark in 1970. The district was expanded in 1984. In Maryland, Chestertown is second only to Annapolis in the number of buildings surviving from the Colonial era.

The White Swan Tavern has a long and studied history. Archeologists uncovered evidence that the site was used as a shoemaker’s tannery before 1733. Then, one of the leading figures of the town purchased the property and built his home there. A portion of that house survives as the front part of the existing structure. 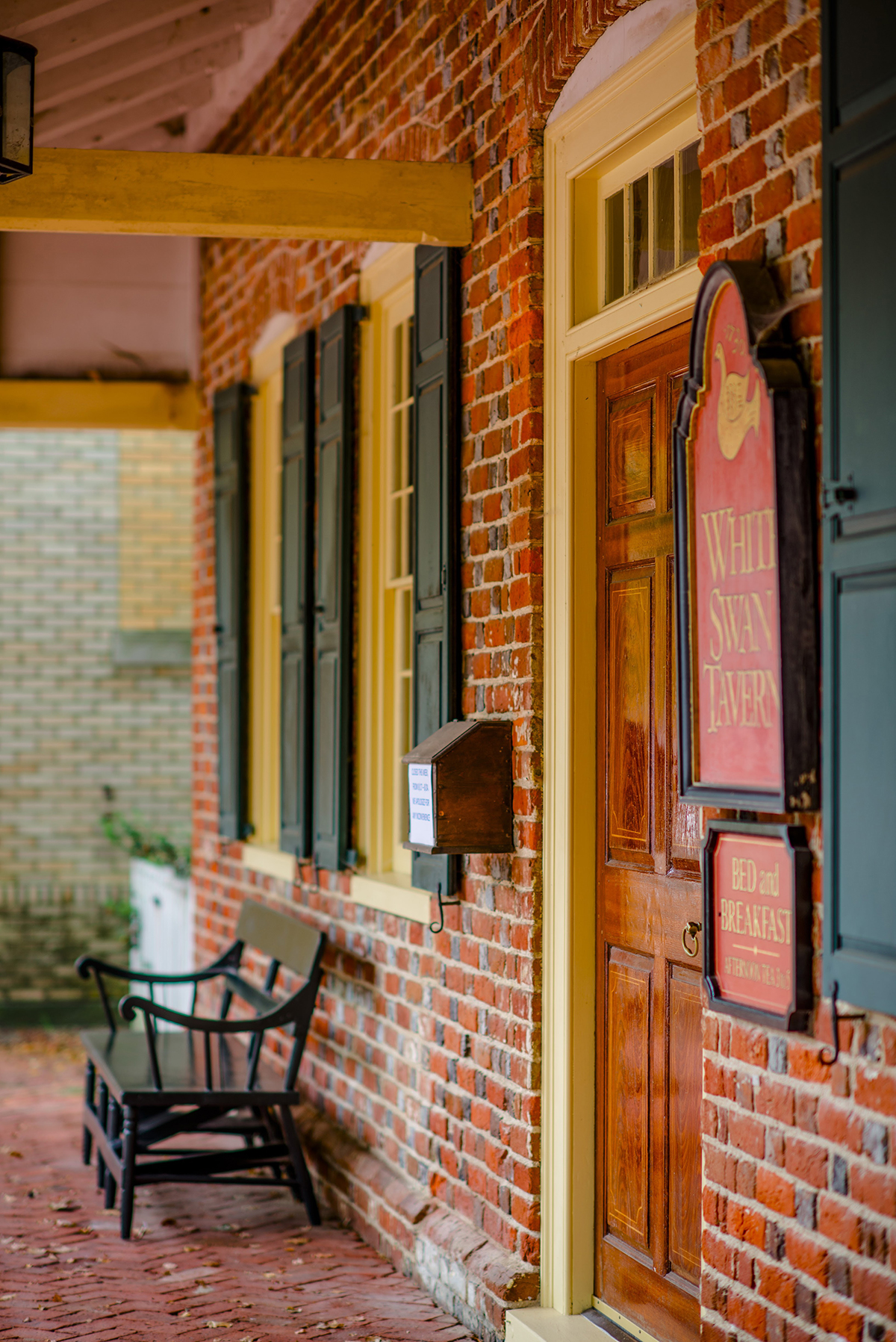 In 1793, the property was passed to John Bordley, who enlarged the building to serve as a tavern from 1803 to 1853. In 1978, the property was restored to its 1793 appearance, with one room devoted to the exhibiting artifacts found on the site. During the entire process of restoration, the owners acquired pieces of furniture, both antique and reproduction, which they thought were appropriate for the building. The White Swan re-opened in 1981 and now serves as an inn. If you can’t stay the night, at least try to arrive by 3 p.m. in time for afternoon tea.

The wonderful thing about Chestertown is its living, thriving community and that its architecture celebrates the town’s vibrant evolution over the centuries. The National Register of Historic Places describes the variety of architectural styles to be seen here:

“In the area around High Street, Georgian, Federal, Gothic Revival and simple early tradesmen's dwellings predominate,” the National Register website states. “The Washington Avenue area consists of large Victorian, Queen Anne, and Shingle styles with additional vernacular utilitarian homes and smaller 20th-century bungalows. Washington College structures erected in 1844 and 1854, Middle, East and West Halls, are the earliest remaining, with Middle being a Greek Revival building and East and West stylistically designed to complement it. Reid or Normal Hall, across Washington Avenue, was originally a late Victorian dormitory with a mansard roof, built in 1896.”

Historic inns near Chestertown reflect those styles. Stepne Manor, available for events and rentals, was built around 1690 and has a wide covered porch. Dating back to the Civil War, The Brampton Inn is a beautifully restored 1860 manor house that sits on 20 acres of landscaped gardens, meadows and forests. 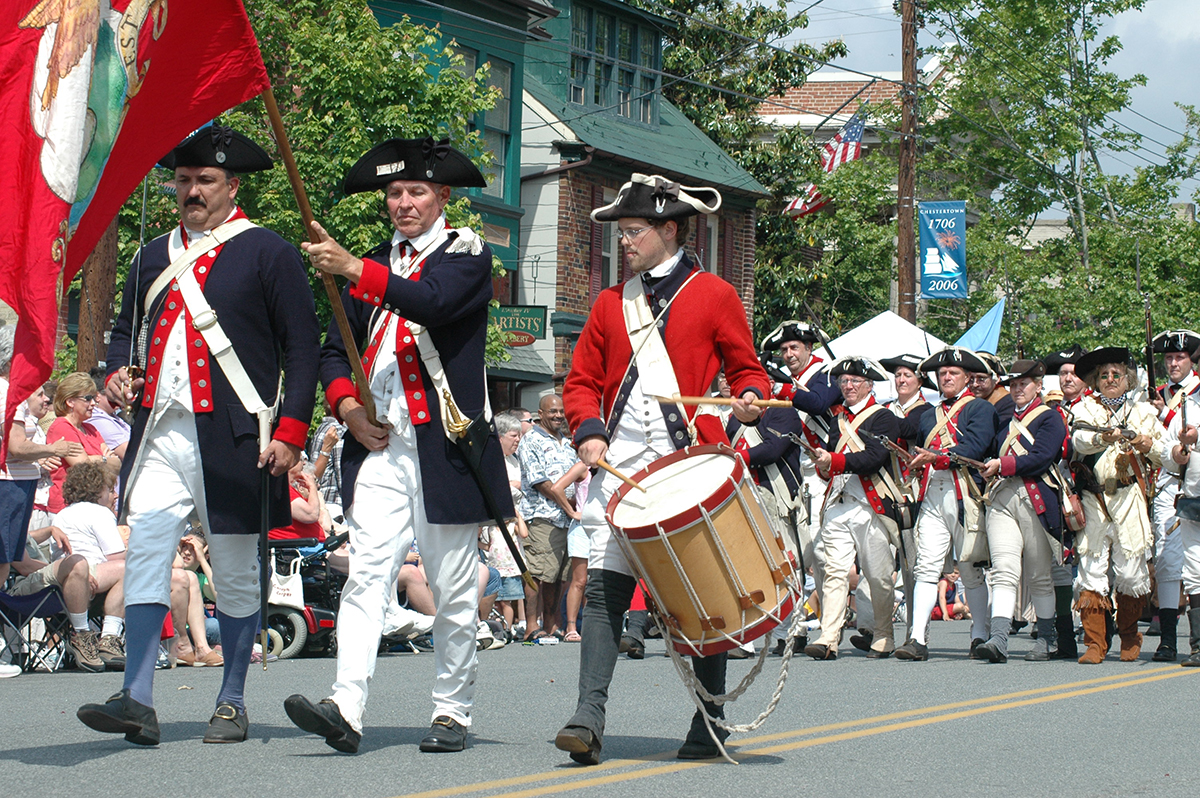 Another wonderful thing about Chestertown is its walkability, and The Walking Tour of Historic Chestertown is one the best ways to see its variety of building styles. You can pick up the walking tour brochure any time of year at the Visitors Center located at 122 N. Cross Street. If you’re into history, plan to take this walking tour during the last weekend in May, when actors in period costumes and uniforms re-enact a historic event every year at the Chestertown Tea Party Festival. The event commemorates the day in May 1774 when the citizens of Chestertown, emulating the citizens of Boston, boarded the brigantine Geddes and tossed detested cargo of tea into the Chester River. The historic replica of the tall ship, SULTANA, stands in for the Geddes.

The festivities start on Friday evening with a street party that includes barbecue, music and children’s activities outside the Garfield Center for the Arts, which has its own unique architectural significance and is a prime example of a restored art deco movie house.

The festival wraps up on Sunday afternoon with wine and beer tastings, teams competing to keep their homemade raft afloat and more entertainment, crafts and food. Learn more about the Chestertown Tea Party Festival, including a schedule of events, here. 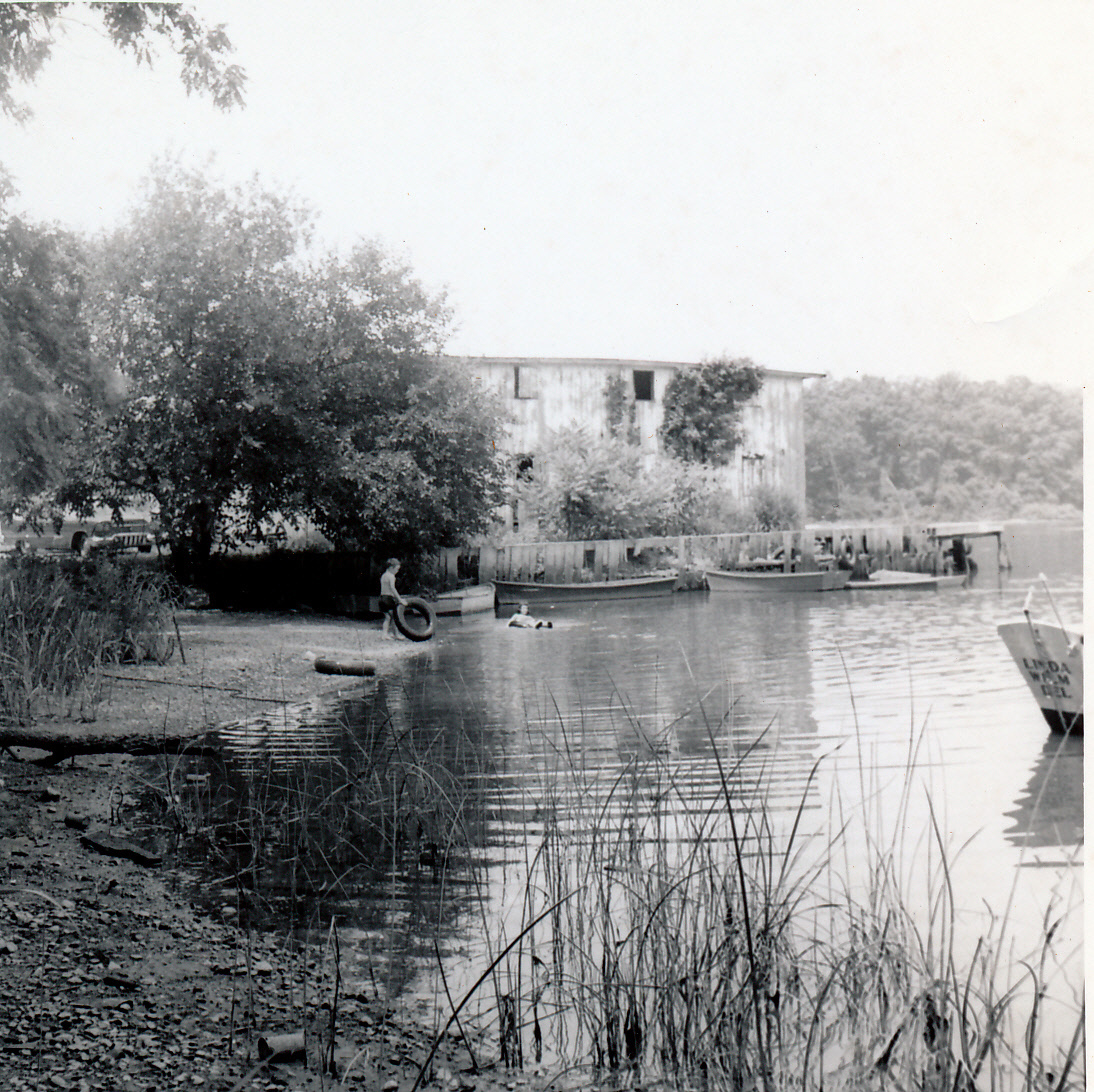 But Chestertown doesn’t have a monopoly on Kent County’s historic architecture. In Georgetown stands a vacant inn, Kitty Knight House, named after the heroine who talked the British into leaving. You can find interpretive panels that tell the whole story of the house during a tour of the Star-Spangled Banner National Trail. The Granary located along Turner’s Creek in Kennedyville was built to store corn and grain for shipment across the bay to Baltimore and Annapolis. The structure still stands in Turner’s Creek Park and Sassafras Natural Resource Management Area. Just a few hundred yards up the hill from the Granary stand The Kent Museum, which houses many artifacts from the Kent County of bygone years.

Rock Hall, known as the “Pearl of the Chesapeake,” was named one of the South’s best small towns to visit by Southern Living Magazine. Part of its charm is all the houses from the early 20th century that were mostly built for the local watermen. Some of these now accommodate overnight guests like the Black Duck Inn that has a wonderful view of the harbor from its screened porch. It’s close to Waterman’s Crab House; a short walk to the Harbor Shack Restaurant; and just a little bit further away from most of the other Rock Hall restaurants and Main Street, where the Mainstay offers delightful live entertainment in an intimate setting.

Just north of Rock Hall, halfway to Betterton, stands a brick Federalist home built between 1817 and 1825 by Joseph Thomas Mitchell; the British took Mitchell as a prisoner during the War of 1812. When he died in 1830, he amassed over 1,000 acres. The property stayed in the Mitchell family until 1852 when Joseph Mitchell Jr. sold the property to G.D.S Handy and J.G. Gordan. The following owners, John and Annie Armbruster, parceled off 30 acres of the land to the developers of the Tolchester Amusement Park. Tolchester became the summer destination for Baltimoreans from the 1880s until it closed in 1962.

The Mitchell House was a private residence, a nursing home, and then a bed-and-breakfast in the early 1980s. Today, it serves as the Inn at Mitchell House.

These are just a sample of the many architectural treasures that today serve as inns, restaurants and museums, where you can enjoy Kent County’s historic hospitality. For more information on how to plan your visit, click here.