Beaches of Kent County with a Rich History

It’s hot and you want to get away for a couple of days to a quiet spot not too far away, where you can play in the water with your kids without the crowds. Where do you go? Take a tip from history. Try a place that’s an hour’s drive closer to Baltimore and Annapolis than Ocean City. Instead of the Atlantic Ocean, dip your toes in the cool, fresh water of the Chesapeake Bay at one of the historic beaches in Kent County on Maryland’s Eastern Shore. 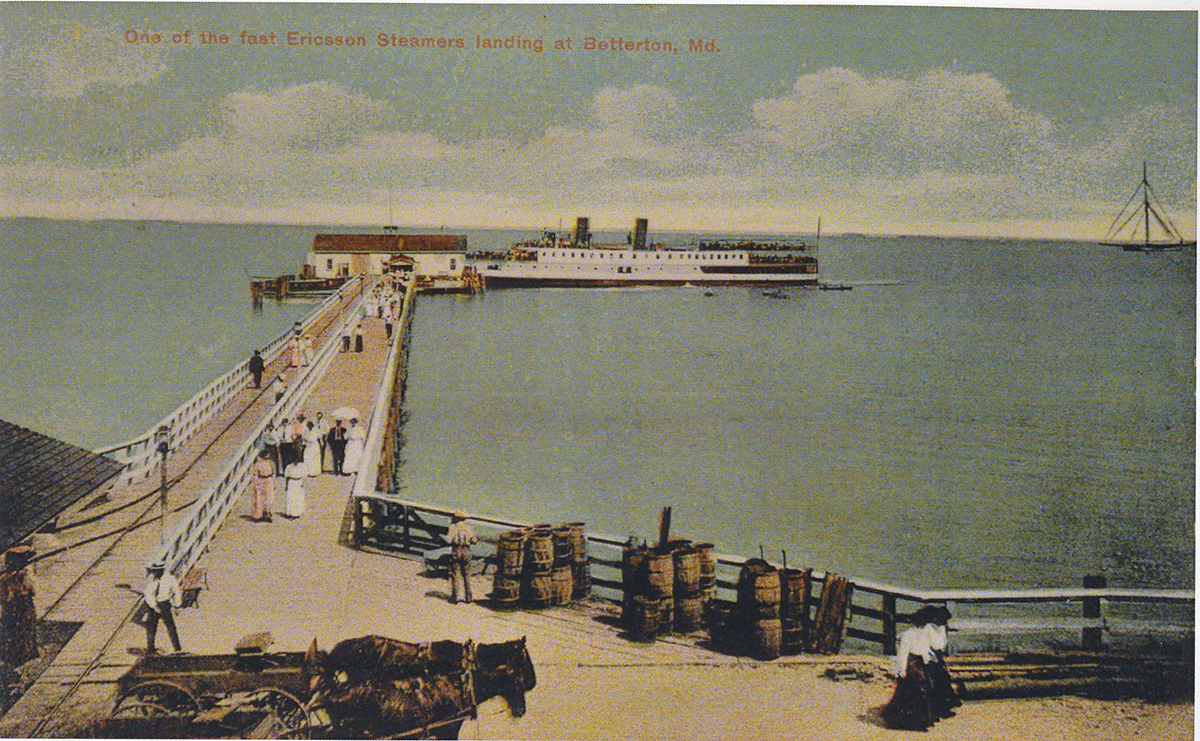 This lovely little town, 12 miles from Chestertown, perched on a bluff overlooking the mouth of the Sassafras River at the northern end of the Chesapeake Bay, was not always so remote. Back in the day, visitors came by the thousands from Baltimore, a breezy steamboat ride away.

Fresh water flowing out of the rivers and the sandy beach that attracted visitors 100 years ago is still there. With so little salt in the water, sea nettles are nonexistent. Sea nettles are the stinging jellyfish that infest brackish water in the lower parts of the Bay every summer. The water is cool and clean, the bottom is sandy and firm, and it gently slopes to neck-deep, so you can enjoy a real swim. At other sites around the Bay, the water is so shallow you have to wade out a long way before it gets deeper than your shins.

The beach is popular with local families enjoying the sun and the water, there’s plenty of room to stake out a picnic blanket and an umbrella. There’s a bathhouse where you can shower and change, and a shady picnic pavilion on the bluff overlooking the beach. Access to the beach—even the parking—is free.

Refreshments can be found at Marzella’s by the Bay, a family-friendly eatery that’s great for sandwiches—its Philly cheesesteaks are favorites—plus burgers, and best of all, pizza is served there too.

You can stay at Evergreen Knoll Cottages, set along the shore of the Sassafras River with a private beach and pier, which provide a perfect setting for kayaking, canoeing, fishing or soaking up the serene waterfront atmosphere.

From the turn of the 20th century up until after World War II, Betterton’s beautiful sandy beach and the freshwater flowing out of the Susquehanna River spawned a resort that attracted no fewer than 11 hotels full of families who spent a whopping $54 a week for rooms, breakfast and dinner (lunch was on your own). There was a dance hall as well as a bowling alley. But the beach was the main attraction. 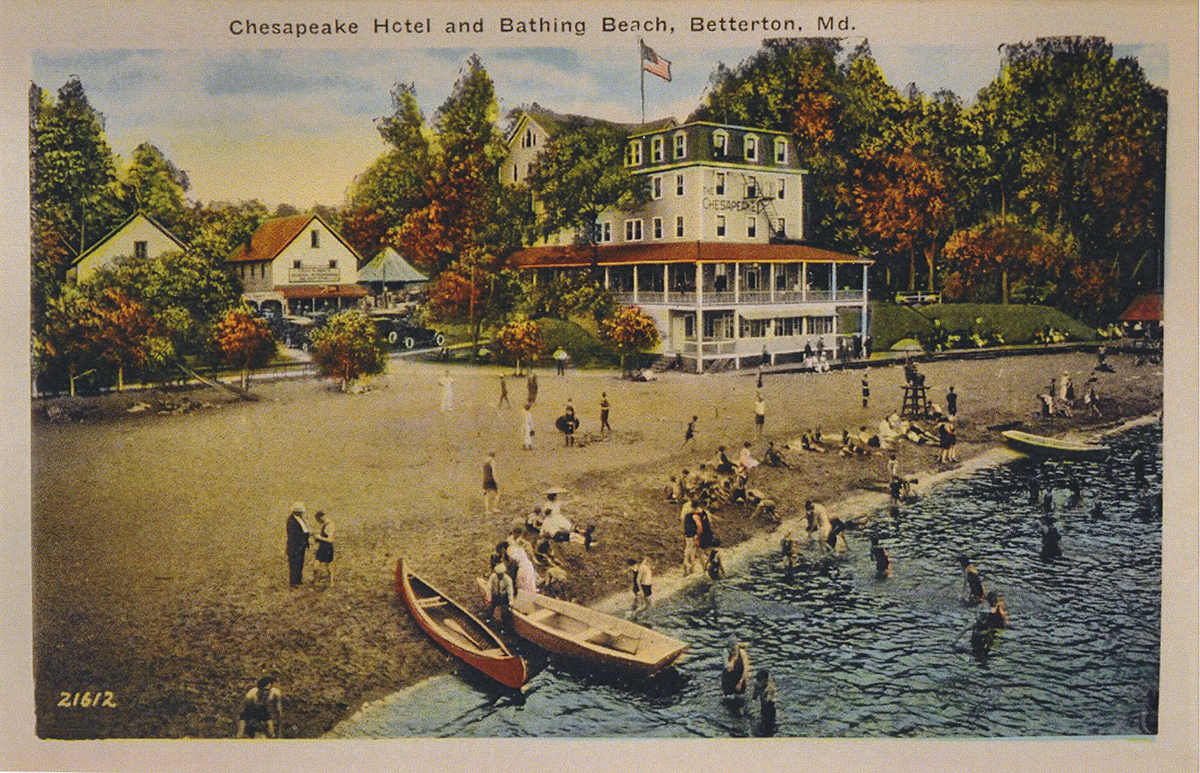 After the war, people started buying cars and in 1952, the state built the first bridge across the Bay to accommodate them—The Chesapeake Bay Bridge. The steamboat era blew its last whistle. Meanwhile, air conditioning became more affordable. This combination of fateful evolutions led to the development of Ocean City, Maryland as a competing resort, one that boasted air-conditioned hotels and motels. People started taking their vacations “downy ocean,” to Ocean City and places like Betterton slowly became quiet, quaint bay-front beach communities. The last excursion boat left the Betterton pier for Baltimore in 1968.

After that, some of the old hotels were torn down. Others became stately homes that are now listed on the National Register of Historic Places as prime examples of Victorian architecture.

Carolyn Sorge, better known by the residents of Betterton Beach as “Candy,” was mayor of the town for 28 years. In that time, she led the town’s resurgence as a “quiet, small, beautiful community.”

You might meet Candy when you visit the Betterton Heritage Museum in the old church at the top of the hill above the beach. It’s open from 1 – 3 p.m. on any Saturday or Sunday between Memorial Day and Labor Day. Candy volunteers there to share the town’s unique history, along with her sister, Ginny Story and Ginny’s husband, Dick, who all have resided in Betterton for decades. If you’re a bird lover, you’ll appreciate the museum’s collection of decoys carved by the world-renowned local craftsman Charles “Speed” Joiner.

Candy Sorge’s lasting accomplishment was to organize the Betterton Community Development Corporation, which convinced Kent County to purchase much of the old resort property to create the public beach, which is once again attracting visitors from all around the region.

Betterton’s first recorded visitor was one of note. Captain John Smith stopped by on August 1, 1608, on the first of his Voyages of Discovery in search of the Northwest Passage. That visit inspired Betterton Days, the festival that takes place each year on the first weekend in August.

The town celebrates its history with a beach party and fireworks on that Friday evening and a parade starting at 10:30 a.m. on Saturday. Dick Story serves as the master of ceremonies for the parade, which features many fire trucks and a meticulously restored “ark,” a houseboat used by the early fishermen as a floating bunkhouse. As Candy Sorge says, “When you get down to it, there’s an amazing amount of history here.” 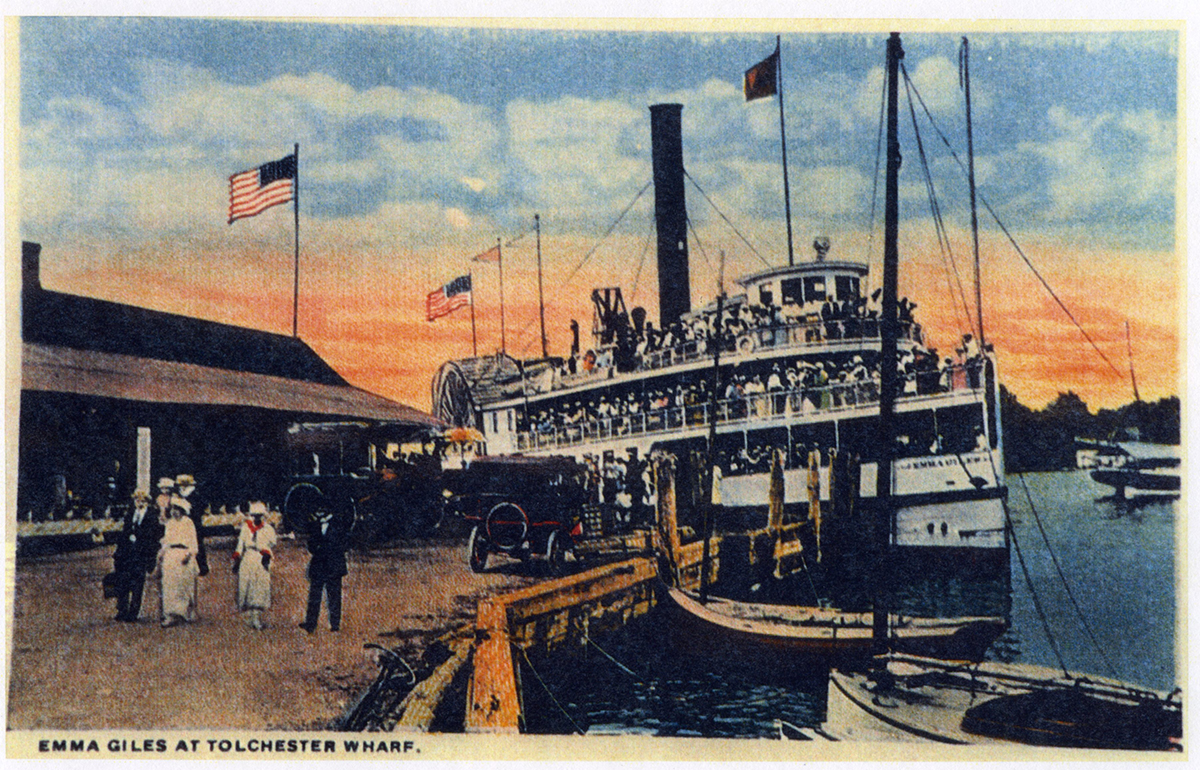 A hundred years ago, folks came by steamboat to celebrate summer to the tune of calliope music on a merry-go-round and a roller coaster. Today, Tolchester Marina attracts hundreds of sleek gas-powered ski boats and cabin cruisers to celebrate summer to the tune of live pop music emanating from the palm-tree shaded Shanty Beach Bar. The common connection through the decades: families enjoying the summer sun shining on the Chesapeake Bay’s sandy beach. And crabs. Lots of blue crabs.

The Channel Restaurant at Tolchester Marina serves great crab cakes and a highly rated bowl of cream of crab soup. Or you can enjoy grilled burgers and hot dogs, cold drinks and live entertainment at Shanty Beach Bar. The music schedule features regional favorites like Bird Dog and the Road Kings as well as nationally renowned acts like contemporary country legends Pam Tillis and Lorrie Morgan.

The marina provides its members and slip-holders with access to the private pool and beach. On any sunny weekend day, a festive fleet of small boats anchors out off the beach within listening distance of the music. 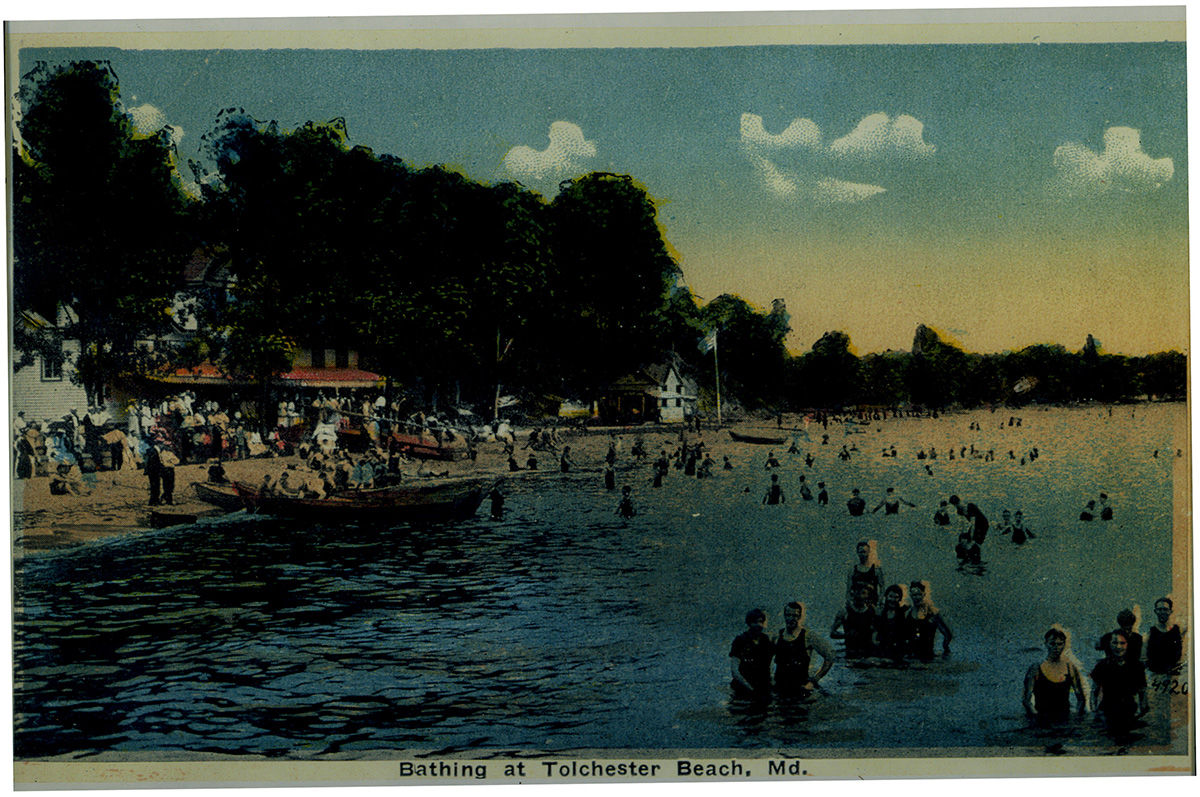 The marina is located just 20 miles north of the Bay Bridge, and directly across the Bay from Baltimore’s Inner Harbor, so it’s easy to get to by boat. By car, it’s two hours, more or less, from Baltimore, depending upon whether you go across the Bay Bridge or drive around the top of the Bay. It’s just a little over an hour’s drive from Annapolis. Nearby Rock Hall and Chestertown provide a wide range of overnight accommodations, from quaint B&B to waterfront inns.

According to the Maryland Historical Society, Tolchester Beach amusement park was once a favorite destination for Baltimore city folks, who would travel by steamboat 27 miles across the Bay. The side-wheel steamer Louise, operated by the Tolchester Steamboat Company, carried 2,500 passengers at a time from Pier 15 at Light Street in Baltimore to the resort. That one boat is said to have carried 5 million passengers between 1882 and the early 1920s.

The visitors enjoyed the park’s hotels and restaurants, bathed at the beach and rented boats for fishing and crabbing. There was even an amusement park with a merry-go-round and a roller coaster, a shooting range and a ten-pin bowling alley.

Like other Bayside resorts, Tolchester declined as the rise of automobiles and construction of The Chesapeake Bay Bridge made a trip to the ocean more accessible. The land at Tolchester Beach was finally sold for development in 1962.

Tom McHugh, former director of The Mainstay arts center in nearby Rock Hall, says if you want to learn more about the history of the park, visit Tolchester Beach Revisited Museum housed in a small building in Oyster Court behind the Mainstay on Main Street. 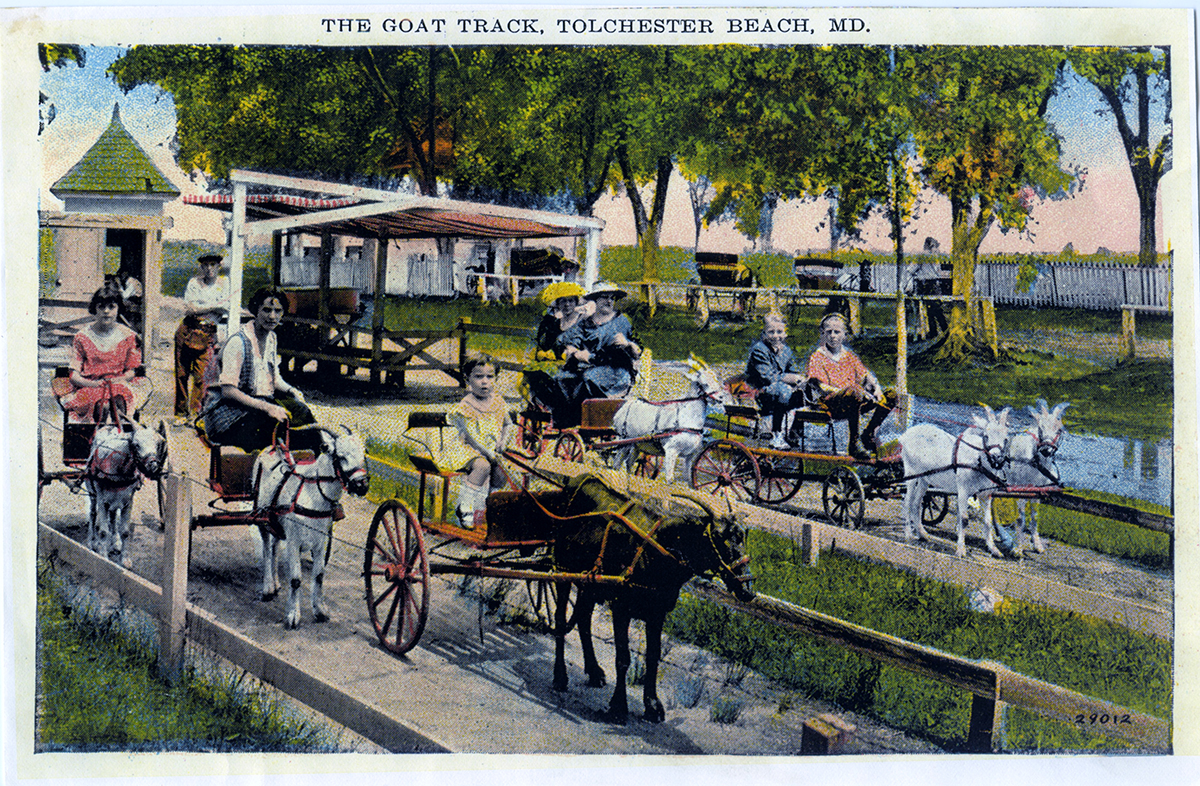 Tom’s friend, the late Bill Betts, a retired banker who grew up nearby and remembered going to the park as a child, devoted years of study to the Tolchester Beach Amusement Park and assembled a collection of artifacts and memorabilia for the exhibit. The museum is open on Saturdays and Sundays from 11 a.m. to 3 p.m. from late spring to early fall. Admission is free.

Astonishingly, more than 20,000 visitors have signed the museum’s guest book. Many of these visitors shared their own childhood experiences at Tolchester Beach from long ago.

If the visit to Tolchester Beach Museum sparks a need to take a dip, head down Beach Road to Ferry Park where you’ll find Rock Hall’s swimming beach and gazebo. It has picnic tables and barbecue stands, as well as outstanding views across the Chesapeake Bay to the Western Shore including a gorgeous sunset that is not to be missed.