The Eastern Shore was given its name by Captain John Smith, who sailed from Jamestown in the summer of 1608 to explore the Chesapeake Bay as far north as the Sassafras River. Kent Island was one of the initial settlements, starting about 1631, and for three hundred years thereafter the Eastern Shore thrived on its agricultural and seafood base, and prided itself on its distinct and independent ways.

The completion of the Bay Bridge linking Annapolis to Kent Island in 1952 ended the Eastern Shore's previous isolation, although residents proudly cling to a culture and attitudes that have always given the Eastern Shore its unique flavor.

Kent County is bounded by Delaware on the east, and what is the Mason and Dixon line, on the north by the Sassafras River and Cecil County, on the west by Chesapeake Bay, and on the south by the Chester River. The fact that three sides of the county are waterways means that opportunities for water-based recreation are truly extraordinary.
All three areas are superb boating locales, where beautiful scenery combines farmlands with historic mansions, where many gunkholes invite a quiet night's anchorage, where there are parks, bird sanctuaries and preserves, plus the Schooner Sultana, museums and historic areas to visit. Anchorages, transient docking, and excellent service and support facilities are plentiful throughout the County. 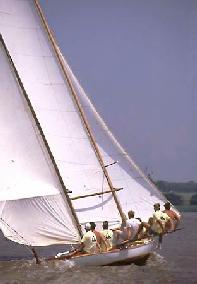 The Chesapeake Bay and the Sassafras and Chester Rivers are ideal sailing waters. There are ample marinas for those who prefer to tie up for the evening, but there are also famous gunkholes for those who like to drop anchor for an overnight. Many areas are shallow, but the bottom is soft and the damage from grounding is mostly to the captain's pride rather than to his craft.

The Chesapeake Bay log canoe was originally the Indian hollowed log without sail. Early Colonials added a simple sail, and then went to three and five log construction to increase the size of the craft. They are narrow of beam and have hiking planks on which the crew maneuver to provide counterweight to the enormous amount of sail carried.

Power boaters find a wonderful variety of choices in these waters. With generally shallower draft than sailboats, these boaters can range closer to shore and farther upstream.

These are the ultimate shallow draft vessels. In addition to the rivers and streams in and about Kent County, they can take advantage of several interior lakes.

There are almost two dozen launching ramps, both county-maintained and commercial. Kent County sells an annual sticker that must be exhibited to show that a launch fee has been paid. 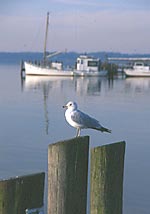 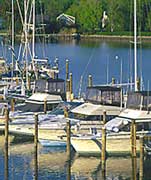 There are over thirty marinas on the banks of the Sassafras and Chester Rivers and the Kent County Bayshore area. These marinas range from large ones complete with ships' stores and gift shops, restaurants, pools, and playgrounds to those more directly concerned with boating operations. The latter include, however, marinas with seventy-ton lifts, rescue operations, and engine and boat repair facilities. All marinas have slips and many have moorings.