To take the full tour of Kent County, use the tabs below to view the tour map and driving directions, or if you want to start with something less ambitious, click a location on the menu for a more detailed maps of the towns and their surroundings.

This map outlines a driving tour of the entire county, a distance of about 110 miles. Points of interest and historic sites outside the major towns are marked with red circles and numbered. The numbers correspond to the numbers in the written guide to the tour, available on a separate page. 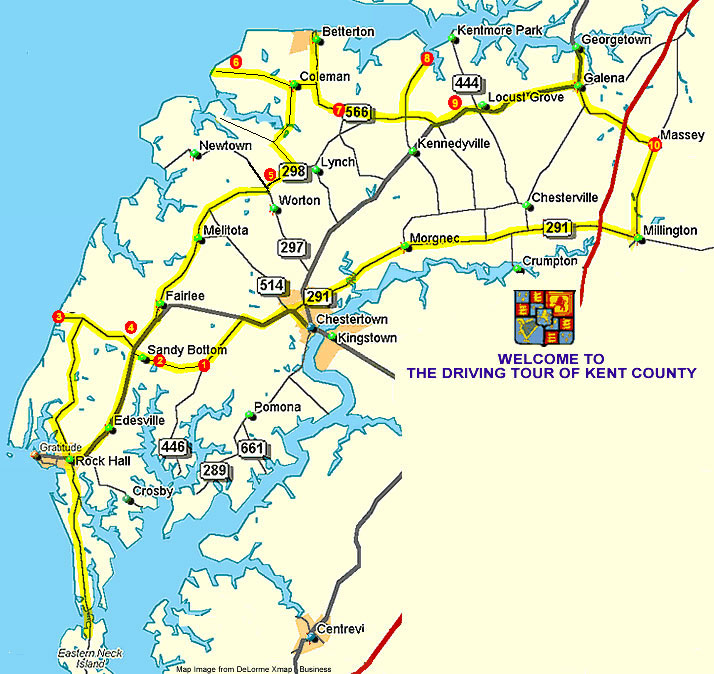 Our driving tour of Kent County begins as you leave Chestertown on Maryland Route 20, heading southwest towards Rock Hall. After leaving the outskirts of Chestertown, stay on Route 20 for 3.5 miles, then turn left onto Route 446, also called Broad Neck Road.

At the first four-cornered intersection, turn right onto

Ricaud's Branch Road and continue for 2 miles. The inset map below will help orient you.

You are now driving on one of the first turnpikes constructed in this country. It was along this route that Col. Tench Tilghman, Secretary and Aide de Camp to George Washington, made his famous ride from Virginia to Philadelphia to carry the news of the Colonial victory over Cornwallis at Yorktown.

On the right at the 2-mile mark is

St. Paul's Episcopal Church, the oldest surviving Anglican Church on the Eastern Shore. The present building was erected in 1711 to replace an earlier church on the same site completed in 1696. St. Paul's is surrounded by a magnificent 19-acre churchyard and is one of two churches in Maryland with a separate Vestry house. The Vestry, now restored, was completed in 1766 and has been used as a court, a schoolhouse and a barracks for British troops during the War of 1812. The site is well worth a visit.Return to Ricaud's Branch Road and turn right. On your left is Chesapeake Farms, a 3,300 acre wildlife preserve and agricultural management area owned and operated by the DuPont Corporation. You can take a self-guided tour of a part of the wildlife habitat by turning right off Route 20 onto the dirt road just beyond its intersection with Ricaud's Branch Road. At that intersection, turn left and follow Route 20 toward Rock Hall. Click for a map of Rock Hall. Leave Rock Hall traveling north on Route 445 towards Tolchester. At the intersection of Routes 445 and 21, turn left and travel along the northern boundary of the Kent County Agricultural Center towards Tolchester Marina.

The Marina is built on the site of what was once Tolchester Beach, and atop the hill on the right there was once a well-known and popular amusement park. Founded in 1877, Tolchester was a thriving port and a favored holiday destination through the turn of the century. The construction of the Bay Bridge and of modern roads put an end to the regular ferry runs from the Western Shore to Tolchester, and today the area is the site of an extensive residential complex.Leave Tolchester and return east on Route 21. Near the intersection of Routes 20 and 21, you will see

Caulk's Field, the site of a battle between the local militia and raiding British troops during the War of 1812. The historical marker on the field's western border describes the militia's victory and the subsequent British retreat.At the intersection of Route 21 with Route 20, turn left and proceed north on Route 20 to its intersection with Route 298. Turn left here and proceed north on Route 298 through the small town of Fairlee. In about 5 miles, you will pass through Butlertown and see Kent County High School on your right. Immediately on the left is the

I.U. Episcopal Church, built in 1765. The church takes its name from the initials, "I.U.", found on a large boundary stone nearby. In colonial times, residents made the letter, "J", like the letter, "I", so in all likelihood the stone demarcated a boundary belonging to a J. Usilton or Urie, early residents of the county, and had nothing to do with the church.

Camp Tockwogh, a YMCA Camp named for the Indian tribe which inhabited Kent County before the arrival of English settlers. If you continue to the end of this road, you will find a US Coast Guard Station. Return on Route 443 to Route 292 and turn left on 292 toward Betterton. Click for a map of Betterton. From Betterton, take Route 292 south to the small town of

Still Pond. The name is a corruption of "Steele's Pone," named for an early settler who took up land in the area. "Pone" is an Elizabethan word which simply means 'favorite.' From Still Pond, follow Route 556 east to Route 298 North and turn left on Route 448 North to travel up to

Turner's Creek Park. On the right before the public landing is the Kent Farm Museum, open on the first and third Saturday of each month. The private colonial mansion located in the park is known as Knock's Folly. The Sassafras River Natural Resource Management Area is across the road with 1,000 acres of farmland, woodlands, tidal ponds and marshland along the southern bank of the Sassafras River. The Management area is a Bald Eagle nesting site and has excellent hiking and biking trails.Return on Route 448 North to Route 298. Turn left and drive until you reach

Shrewsbury Church on the left. The current building was completed in 1832, but the Parish was established in 1692 and is the mother parish of the Episcopal parishes in Kent County with the exception of St. Paul's (Marker 2). Brigadier General John Cadwalader, the Revolutionary War hero, is interred in the Shrewsbury Churchyard. Continue north on Route 213 to Galena. Click for a map of Galena. After visiting Galena and Georgetown, 3 miles to its north, turn around, return to Galena and follow Route 290 south to Route 313 south. There, bear left and cross Route 301 to

Massey. Centered around family land holdings, Massey was important because the railroad traversed the town. Follow Route 313 south to Millington. Click for a map of Millington. From Millington, take Route 291 West toward Chestertown. You will be passing through some of the most fertile farmland in Maryland. As you enter the limits of Chestertown, turn left onto Route 213 South. Washington College lines both sides of the road as you proceed south towards the Chester River. Founded in 1782, the college is the tenth oldest in the Nation. This concludes your tour of our beautiful county -- we hope that you enjoyed it and we will welcome you back any time you choose to come! Bon Voyage!